Photograph below courtesy of and copyright of Bruce Wicks

Over ten years ago, James E. Freeman was savagely attacked in his Xenia home by three youths; he died of his injuries.

This tragedy led the Freeman family along with citizens of the Xenia area to form the Xenia Community Safety Corporation which polices the townships of Xenia and Songer. Dependent upon voluntary contributions, the Safety Corporation held a Barbecue Dinner on Saturday, March 24 at the Xenia School.

The menu was a choice of pulled pork or grilled chicken breast, cheesy potatoes, baked beans and coleslaw. There was an incredible choice of pies and cakes with tea and lemonade available.

Before, during, and after dinner many items were on display for the silent auction and tickets were sold for a 50/50 drawing, an Easter Basket, and the Big Raffle for a shot gun, a rifle and a 19” TV. After dinner bingo was on everyone’s mind. Norma Anderson called the ten games of bingo. The prize for each game was $25.00 but the fifth and tenth games were “black out” and worth $50.00. Once bingo was complete, the raffle and drawing prizes were announced:

The 50/50 prize of $153.00 was won by Richard Rice; the Easter Basket was won by newborn Drake Jemerson and in the Big Raffle, the first prize went to Erin Davis, the second prize to David Mueller and the third prize to Rob Clifford.

The family of James E. Freeman seemed pleased with the evening and, when Steve Freeman was asked if he had any comment, he said that the family were just very happy that the community had continued to support the Safety Corporation so well for the last ten years.

Photograph courtesy of and copyright of Marsha Dewsbury, Advocate Press 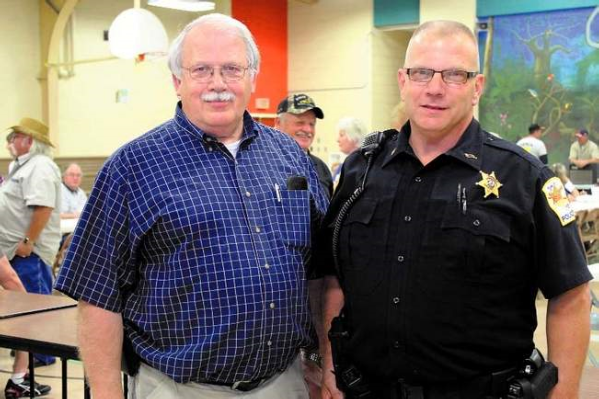 Article courtesy of and copyright of The Clay County Advocate Mar 31, 2012 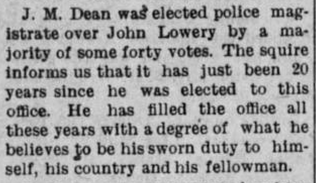 J. M. Dean was elected police magistrate over John Lowery by a majority of some forty votes. The squire informs us that it has just been 20 years since he was elected to take this office. He has filled the office all these years with a degree of what he believes to be his sworn duty to himself, his country and his fellowman.