There are two flouring mills, both frame buildings, and each containing three sets of buhrs or stones, and having a capacity of fifty barrels of flour per day. One is known as the Eclipse Mills and is owned by Wescott, Bryan & Co., but operated by M. Spaulding & Co., to whom it is rented. The other is known as the Excelsior Mills, and was originally built for a lint mill and converted into a flouring mill in 1873 by Dayton & Davis. It is now under the management of D. W. Riley & Son.

A woolen mill is also a prominent feature of the town.

The positions of three mills are shown clearly on the 1881 land map of Xenia Township: 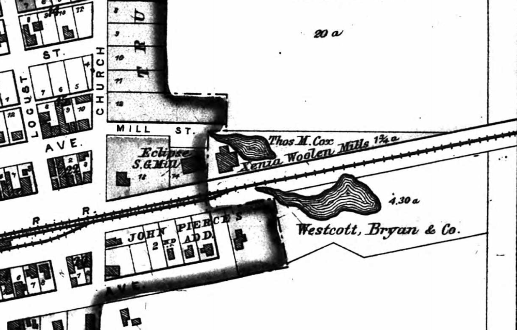 Frank Leppo is back at his regular place of business at the Xenia Milling Co., after spending the Christmas holidays with his sisters in the north part of the state.

Extracted from the Flora Journal Record of January 8, 1925