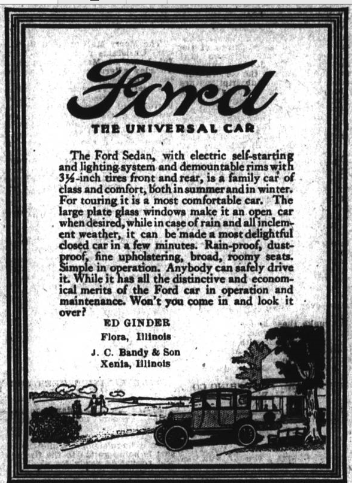 Who said Xenia was not growing all the time. Think of it, a new garage is not to go up on the vacant lot just east of the new picture show building. Arthur Bandy has purchased the lot and will immediately erect a modern brick building properly equipped for the work of repairing and over hauling cars of all kinds. This is something that is needed in Xenia and will no doubt prove a success. This makes three new brick buildings which have gone up in our town in the past year and some talk of another one. “Can you beat it?” Boost the town: it needs it. Boost, and the town boosts with you; knock, and you knock alone. 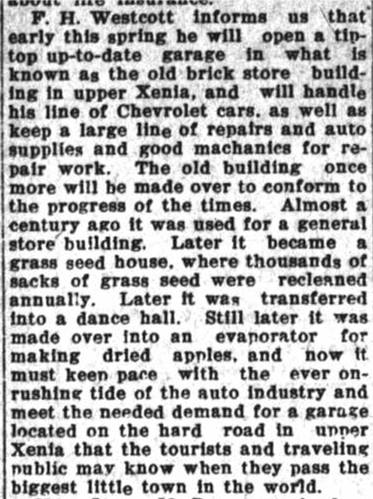 F. H. Westcott informs us that early this spring he will open a tip-top up-to-date garage in what is known as the old brick store building in Upper Xenia, and will handle his line of Chevrolet cars, as well as keep a large line of repairs and auto supplies and good mechanics for repair work. The old building once more will be made over to conform to the progress of the times. Almost a century ago it was used for a general store building. Later it became a grass seed house, where thousands of sacks of grass seed were recleaned annually. Later it was transferred into a dance hall. Still later it was made over into an evaporator for making dried apples, and now it must keep pace with the ever on-rushing tide of the auto industry and meet the needed demand for as garage located on the hard road in upper Xenia that the tourists and travelling public may know when the pass the biggest little town in the world.

F. H. Westcott has moved his garage from the Shannon garage building to the J. A. Peirce building, one block east of the Ford garage. He is still actively engaged in selling and servicing Chevrolet cars.

Extracted from The Flora Journal Record of Oct 28, 1926

Extracted from The Flora Journal Record of Jan 8, 1925