James was a volunteer soldier in the Civil War, enlisting at Lawrence County, Ohio on March 26, 1863. He served with the 3rd Virginia Cavalry and was wounded at the battle of Fischer and had his left leg amputated, being discharged in Philadelphia, Pennsylvania on May 30, 1865.

James married his first wife, Susan Lambert neé Anderson (1840–1883), a widow, in Lawrence County, Ohio on August 10, 1865. Susan’s first husband William Lambert was a casualty of the Civil War in 1864. James and Susan had five children

James died on March 11, 1928 at Xenia and is buried at  Powers Cemetery, Wayne County. 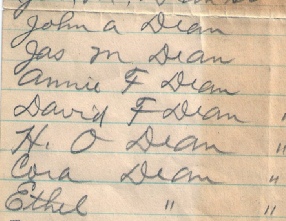 Listing of children on his ‘Coroner’  letterhead which also gives birthdates